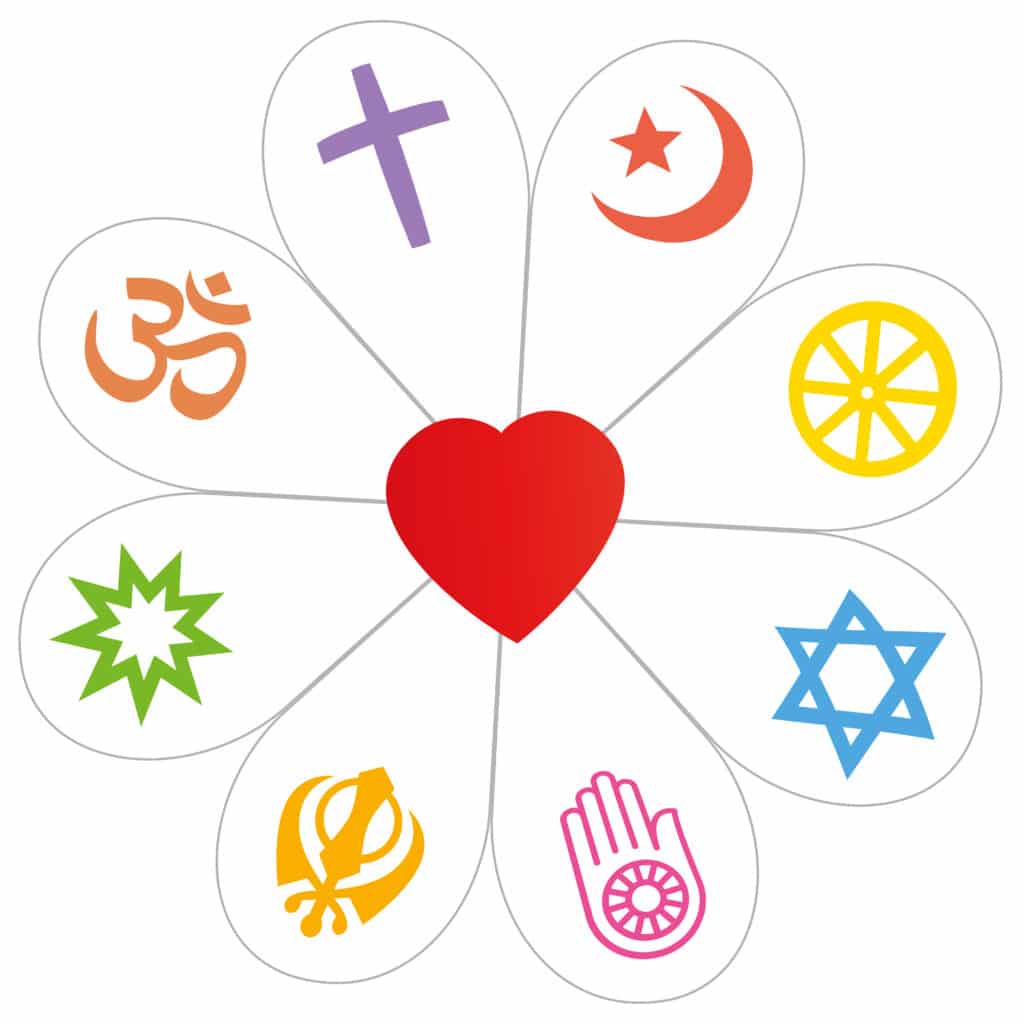 The first experience of interfaith cohousing is about to kick off in Los Angeles: we spoke about the initiative with its founder, Mohammed Al-Samawi

An interfaith cohousing: living together under the same roof, not by chance, but by choice. And not living in the sense of merely existing side by side, but in that of doing together: sharing, learning, celebrating. To be flatmates, but also partners who share a common vision: making the “other” a little less other. For a period of time ranging from one to two years, with the financial support of a fellowship and the human support of a team of experts in community and interfaith work. Here is the idea at the core of Abrahamic House, which will open its doors for the first time in Los Angeles on March 2020. The applications window for the first fellowship closed on November 30. The people selected to live together will be four youths aged between 21 and 35, belonging to four different faiths: Judaism, Christianity, Islam and Baha’i.

The mind behind the initiative is Mohammed Al-Samawi: a Yemeni youngman who fled civil war in his home country and came to the United States as a refugee four years ago. His story, which is told in the autobiographical book The Fox Hunt (Harper Collins Publishers) and is about to become a movie, produced by Marc Platt (La La Land) and written by Josh Singer (Spotlight), echoes back to a famous theatrical line: “I’ve always depended on the kindness of strangers”.

More precisely, four strangers, who knew little or nothing about Mohammed, but nevertheless saved his life. “In Yemen I was engaged in interfaith dialogue through the Internet and the social media”, says Mohammed. “I had become part of the YaLa Young Leaders network” – a Tel Aviv-based NGO, affiliated with the Peres Center for Peace, which works to create online communities as a mean to foster dialogue and peace among the youths of the Mena Region – “and I was committed to build bridges among Muslims, Jews and Christians. Because of my work I started to receive dead threats from some extremists”.

Mohammed, issued from a Shiite family in a Sunni majority country, began to look for a safest place to stay; he left his hometown, Sana’a, and moved to Aden. He didn’t expect civil war would erupt in that very moment, and Aden would become one of its major battlefields.

Surrounded by fighting militias, Mohammed hid in his apartment with everything he had left: few food supplies and a weak Internet connection. He used it to send the same message to all of his contacts: “Do you know a place where I can be safe?”. “I was expecting the help would come from my countrymen. But everyone was busy with their own problems, so either they didn’t respond, either they said they would pray for my safety. I appreciate prayer, but what I needed was an actual way of escape. What I wasn’t expecting at all was that my call would be answered by four strangers I barely knew from my interfaith work. They didn’t know anything about Yemen, nor had any experience in diplomacy and war refugees. And yet they managed to take me out of the country in a matter of 13 days”.

Megan, Justin, Natasha, and Daniel. A one-of-a-kind operation of rescue between Tel Aviv, New York and San Francisco. Four people, like the glasses of wine and the questions of the the Passover Seder. Coincidentally, Mohammed left Yemen right during this holiday. “He crossed the Red Sea during Passover”, Daniel Pincus, one of the four key-activists in Mohammed’s rescue, commented on a video-interview. “Except that his name wasn’t Moses, it was Mohammed. And he traveled east to west instead than west to east”.

From Yemen, Mohammed first reached Djibouti, in Africa. “I wanted to reach the United States, but in order to obtain a visa and apply for asylum I needed the invitation from an organization”, he says. Unexpectedly, the invitation eventually came from Moishe House, the non-profit Jewish organization which fosters community building through the cohousing experience. “So, I was the first Mohammed to be invited to speak at an event in Moishe House”, he continues. “I loved the whole idea behind Moishe House and since I was looking for a way to continue my interfaith work, I said to myself: why don’t we create something similar, but for people of different faiths? That’s how the idea of Abrahamic House was conceived. The founder of Moishe House, David Cygielman, has been one of the project’s strongest supporters since the beginning, and now he’s a member of the organization’s board”.

Organizationally speaking, Abrahamic House consists of a Board of Directors and a Board of Advisors. The four youths who will be selected for the fellowship will be free to run their own university or work life during the week, but they’ll have to commit for a certain number of hours during the weekend to perform common activities. “There are four types of activities”, explains Mohammed. “The first one is called “Yalla” and includes fun activities, such as night games, dance and cooking classes…; the second one is called S’daqah (from a common root that in both Arabic and Hebrew defines the support one owes to their communities) and will require to volunteer wherever it is needed: whether it is helping a Jewish community to set up a Shabbat dinner or a Muslim community to prepare a Ramadan night, or anything else. The third type concerns dialogue on the big issues of our time, such as antisemitism, islamophobia, human rights, discrimination, and all that we should know better in order to learn how to protect each other; the fourth one is about celebrating holidays together, and by means of that discovering the similarities that exist in each other faith”.

As I ask Mohammed to sum up the ultimate goal of Abrahamic House, he answers by sharing a personal story: “Some years ago I met in Yemen a Christian teacher who gave me a Bible. I didn’t know anything about Jews and Christians back then, but I wasn’t aware of my own ignorance. That gift changed my life, because reading that Bible provided me with more curiosity and willingness to learn about the other. I wish the fellows of Abrahamic House would be like that teacher, someone capable of opening a window on the other’s world”. In the middle and long term, Mohammed is determined to spread the word of Abrahamic House throughout the United States and then to export it in other countries as well.

“We live in a world where people more and more “otherize” the other without actually knowing the other. I love the United Stated and its freedom of speech, the freedom of speaking my mind without fear to be killed. But even here you can witness that people tend to live in their own narrow circles and blame each other for what doesn’t work in society. My country, Yemen, is the living example of the consequences this can bring. There is a story from the Islamic tradition I find very significant. There was a teacher that every day would bring some homemade sandwiches to eat at work. As he would open his lunchbox, he would constantly complain that the sandwiches weren’t of his taste. One day his colleagues couldn’t bear his complains anymore and asked him: “Why wouldn’t you ask your wife to prepare a different sandwich?” So, the teacher replied: “Which wife? Who told you I’m married?”. His baffled colleagues asked: “Who does prepare the sandwiches for you every day then?”. And the teacher answered: “I am”. This story talks about us. We often know very well that we could take the responsibility to “prepare ourselves a different sandwich”, but we prefer to do nothing and complain instead”.

“Gathering, not othering”, this is Abrahamic House’s motto. “If we continue to otherize the other, we won’t be able to find someone to help us when it’ll be more needed. I think a lot of the Muslim woman who stood in defense of the Jewish man and son who were victims of an antisemitic harassment in the London tube, or of the fact that the Jewish community in the United States was the first to protest Trump’s Muslim Ban, as its members keep the memory of what it means to be stuck in a place where they want to kill you. We need more examples like this”.

According to Mohammed, the secret is daring. Daring to know and see with one’s own eyes, without allowing prejudges to affect the process. The title of his book, The Fox Hunt, contains a veiled reference to a Talmudic tale. In the original tale there are some fishes that are continuously threatened by the fishermen and, at some point, are approached by a fox who tells them: “Follow me, I know a safe place for you”. But the fishes understand the trick and swim away. Mohammed’s tale has a different end: “I chose to trust the foxes”, he says.

As our conversation is drawing to a close, I ask Mohammed to share his own definition of faith. “I think faith is about trust and at the same time willingness to know and learn. It is trusting that things happen for a reason. One of the reasons why I became an interfaith activist is that I have a disability. When I was a kid, I would have given everything to be like anyone else, to run and play soccer. Being excluded from the group made me feel angry and unhappy. Until one day my mother said that I should stop being frustrated and start to work on myself. Since I couldn’t devote myself to physical activities, I focused on study instead. That’s how I learned English and discovered Internet, the YaLa Young Leaders community and all that followed. The story of my rescue is about faith as well. During those fateful 13 days, at some point the people who were trying to help me asked me where I was living exactly. I gave them the name of the street and they replied back “Ok, but what is the number of your building”? In Yemen we don’t have such a thing. To find a place we would use indications such as “the second building on the right side after the supermarket”. In that moment I felt wavering: am I doing the right thing, putting my trust in people who know really nothing about my country? Eventually”, he concludes “I trusted them. And I couldn’t have made a better choice”.