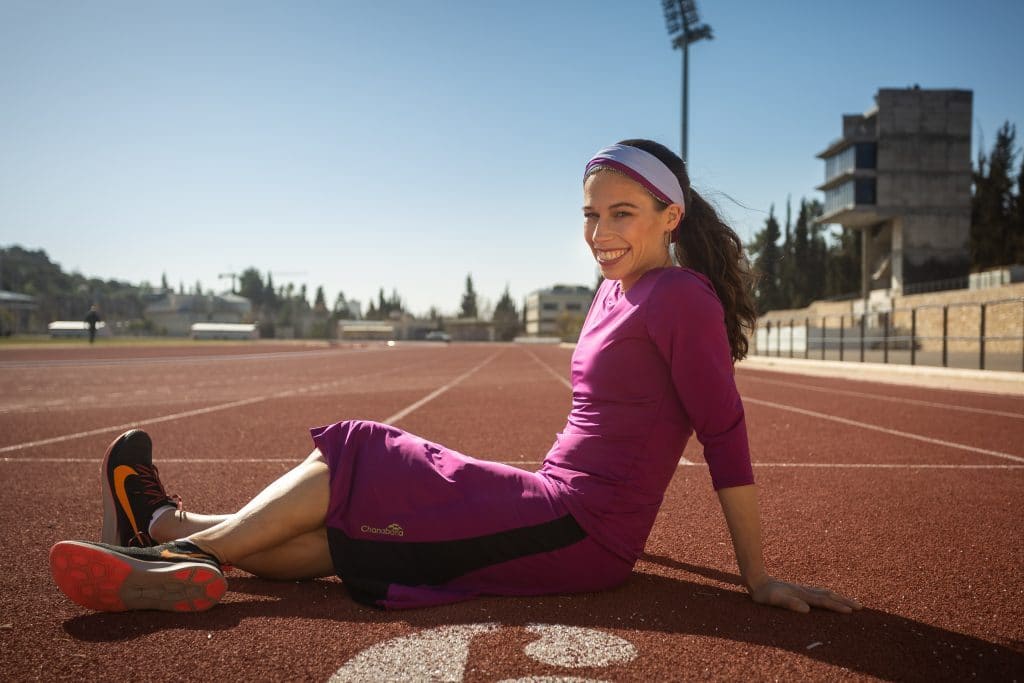 Her nickname on social media says it all: Marathon Mother. Bracha (Beatie) Deutsch, lives in the Har Nof neighborhood in Jerusalem, she’s a mom of five and a champion runner. Born and raised in New Jersey, she was only 19 when she got married and moved to Israel. Now, ten years later, she’s just celebrated her first international victory.

Full of curiosity, we reached Beatie to know more about her story.

Everything has started four years ago, when Beatie, after her fourth baby, decided that she’d had enough to feel out of shape. And since she’s an “all or nothing” kind, she put her resolution into practice by training for her first marathon. What’s so special about running? Beatie told us that she chose “Running over other training because of the flexibility it offered me – I could run at any time I wanted and I wasn’t limited to specific class times or having to make it to a gym. I love running because it always leaves me on a high and I have a chance to appreciate my body, get in touch with my soul, unwind and disconnect from the craziness of our world.”

Beatie ran her second marathon in 2017 in Tel Aviv, while being seven months pregnant with her fifth baby. One year later, she won the Jerusalem Marathon (and set a new record for Israeli female runners) and the Half Marathon in Beit She’an. Less than one month ago, on May 19, was her first international victory, at the Half Marathon of Riga, Latvia.

But what makes Beatie really special, aside from her sport achievements? The answer lies in her background: Beatie is an Orthodox Jewish woman, and among the several principles she’s required to conform to, there’s the respect of tzniut, the value of modesty and discretion which demands, among other things, some precise clothing rules. In a hyper competitive world such as the running one is, where every tiny detail can affect that crucial nanosecond, Beatie races covered head, knee length skirt and long sleeve t-shirt.

Her story challenges all the stigmas against religious women and their potential to achieve success and independence; or, we’d better say, the potential of all women and, even more generally, of every human being to fulfill their dreams without giving up to their core values.

Is it possible to become part of the running world without having to betray your beliefs? Beatie’s answer is positive and determined: “There are a few times where a coach would jokingly tell me: “You’re not going to continue running like that, it’s too hot!”, but I’ve always been steadfast in my commitment to modesty. The more you respect yourself and rock your confidence, the more people respect you for it: there’s no need to apologize for who you are and there’s no need to compromise. To those who perceive their origins (religion, nationality, social status…) as a burder, she suggests to “Listen to your own inner voice, channel your desire and don’t let anyone else stand in the way. If you do face any obstacles because of your background, it will only make you stronger, lead you to become the best version of yourself.”

Beatie’s positive attitude is also a striking characteristic of her social media discourse: on her Facebook and Instagram posts, she stresses the importance of self-esteem and body confidence: how to achieve such awareness and what to suggest to people, especially women, who don’t feel at ease with themselves? Beatie tells she owes her self-confidence to her parents, who “always emphasized being ourselves, doing what we love and not worrying about what anyone else thinks”. And she adds: “I think body confidence comes from working on appreciating yourself as a human being and really loving yourself, which starts with a deep sense of self. So the first step is getting to know yourself fully – your strengths and weaknesses and then you can accept all parts of yourself, including your body.”

In the end, to our question about her future plans, she promptly answers: “I’m committed to working hard so I can improve my times and hopefully qualify for the Olympics.”

Well, from someone who has started from “I’d better do a little sport to get back in shape” and just ended up winning an international marathon, we couldn’t expect anything less.