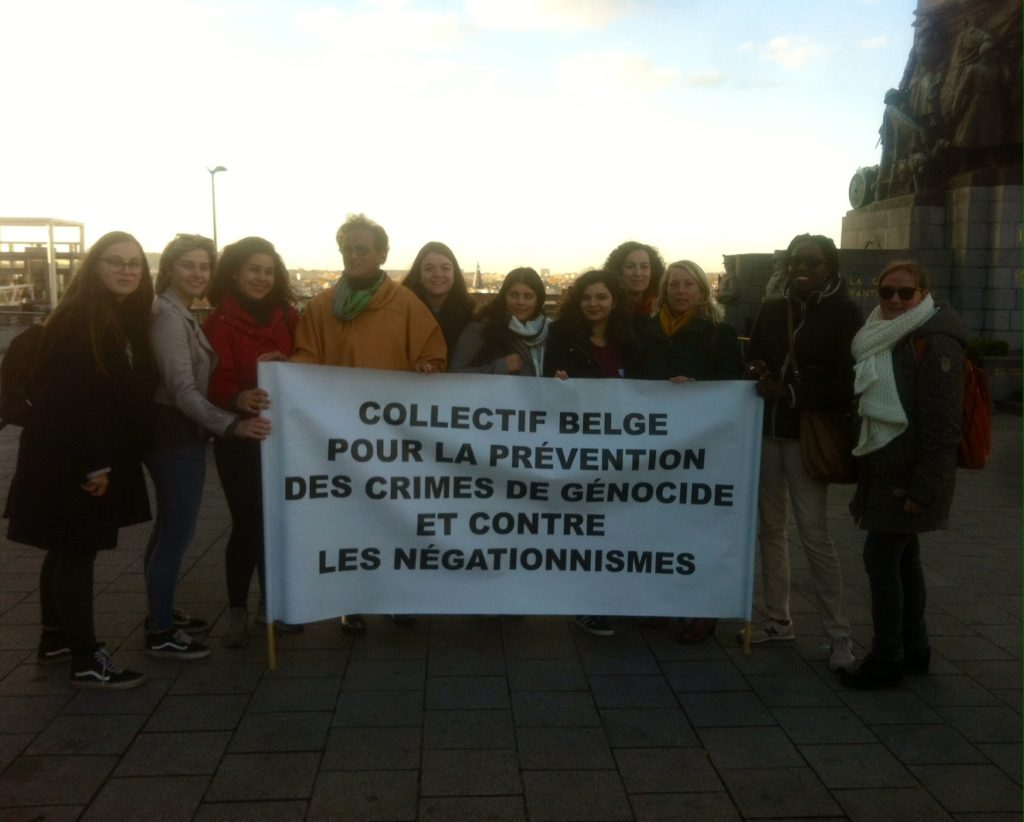 Meet the Centre Communautaire Laic Juif of Brussels, Belgium, and its impressive work for genocide prevention and human rights awareness

“Genocide means any of the following acts committed with intent to destroy, in whole or in part, a national, ethnical, racial or religious group, as such:

(a) Killing members of the group;

(b) Causing serious bodily or mental harm to members of the group;

(c) Deliberately inflicting on the group conditions of life calculated to bring about its physical destruction in whole or in part;

(d) Imposing measures intended to prevent births within the group;

(e) Forcibly transferring children of the group to another group.”

Article II, UN Convention on the Prevention and Punishment of the Crime of Genocide, 9th Dec 1948

Once a month, around 10 people meet in a room at the Centre Communautaire Laic Juif (CCLJ) David Susskind in Brussels, Belgium. They vary in ages, occupations and ethnic origins, but one common thread ties them together: genocide. All of them have lived on their skin, or through that of their ancestors, four of the largest mass murders of the 20th century. Some descend from survivors to the Armenian and Assyrians genocides occurred during WWI, some are Jews whose families escaped the Holocaust, while others have themselves lived through the Tutsi extermination in 1990s Rwanda.

Seventy years after the ratification of the United Nations Genocide Convention, the Belgian Collective for Genocide Prevention and the Fight Against Denialism  – founded in 2015 by a group of six to seven people- has two main purposes: first, to fight any form of denialism at both local and national levels. Secondly, to raise awareness and help putting an end to similar tragedies currently happening around the world or preventing future ones.

The Belgian Collective at CCLJ, as many other humanitarian organizations throughout the planet, will celebrate next week the 70th anniversary of the UN Genocide Convention and the Universal Declaration of Human Rights with dedicated events. In the human-rights community, this anniversary doesn’t come without some criticism: the UN’s definition of genocide has been deemed as insufficiently encompassing, posing issues for the legal punishment of more recent crimes. Not only its “intent” component is hard to conclusively prove, but also Article II fails to recognise other categories possibly subjectable to systematic mass murder, such as minorities with a different sexual orientation or political affiliation.

The UN’s definition of genocide was developed right after the Jewish Holocaust by Jewish-Polish lawyer Raphael Lemkin. It was inevitably was shaped around that one episode, in order to impede it from happening ever again. And while the Belgian Collective reserves special attention to the Shoah, the deadliest genocide ever in numbers, it has opted to approach the issue with a pluralistic, rather than monolithic approach, encompassing different experiences across time and space.

“All of us were fed up with the segregation in the treatment of different genocides,” said Gregoire Jakhian, one of the founding members of the committee, a lawyer whose grandparents survived the Armenian genocide. “The diversity among the survivors, the mere experience of exchanging the suffering, is a true help and an added value.”

The Collective’s monthly meetings are attended by an average of 10 to 20 people. The representatives of four associations constitute its bulk. The Jewish CCLJ is the largest in number, followed in order by the Armenian community, the Tutsi and Assyrian associations. On the top of that, individuals with no personal connection to genocide, generally academics or members of local NGOs, regularly participate.

During the meetings, survivors and their descendants come together and discuss their strategies aimed at criminalizing the denial of past genocides and spread information that could help preventing the next ones, joined by novelists, historians and even Belgian MPs, said Jakhian.

The perspectives within the Collective are incredibly diverse. The presence of non-survivors is particularly important, according to Jakhian, as their focus is more present- and future-oriented, therefore they can steer the group towards views and ideas that, being constituted by victims of past genocides, it might sometimes overlook. Among those with a personal connection to genocide, the crucial difference in perspective is dictated by time: while Armenians and Assyrians are 3rd– or 4th-generation survivors and Jews are 2nd– , if not 3rd-generation ones, the Tutsis have directly experienced murder and violence and present more immediate scars, noted Jakhian.

In these differences, the group sees an opportunity to have more of an impact.

“If you can compare every genocide and find the stages they have in common, you can propose a response to each stage and possibly prevent something similar from happening in the future,” said Ina Van Looy, another founding member, whose mother survived the Jewish Holocaust by hiding as a child. Van Looy is a full-time project manager at CCLJ, focused on citizenship education.

Across the four different genocides the Collective has experienced directly or indirectly, one of the main commonalities was the willingness of the perpetrators to eliminate the evidence of their crimes, as if they had never happened, pointed out Jakhian. Consequently, fighting oblivion informs all three of the group’s operating channels.

Knowledge is the key

First, they try to challenge the ignorance around the subject of genocide among the younger generations, seen by Jakhian and the rest of the group as the biggest danger to the prevention of such crimes in the future. Despite the fact that only 75 years have passed, today around one third of Europeans knows ‘nothing’ or ‘little’ about the Holocaust, according to a recent CNN/ComRes survey.

With the help of two high-school professors – one a history teacher, one a philosophy one – who regularly attend their meetups, they organise trips to local schools, where they hold classes on the meaning of genocides, the conditions for it to materialise and point out the dangers of the denialists’ reasoning, explained Jakhian.

“Students understand that genocide is an exceptional crime, but they see that the driving principle is discrimination and often they have experienced discrimination as well,” said Van Looy, explaining that such lectures have mostly been received positively. “You talk about the sufferance of one people and students get to share their suffering.”

However, the Collective has also had less welcoming experiences across Brussels’ high schools. Students occasionally challenged the existence of the Armenian and Tutsi genocides with “violent reactions,” or claimed that “the Jews deserved it,” recounted Jakhian.

Another initiative promoted by the Collective, especially through its CCLJ members in conjunction with the Jewish Belgian Association, is the introduction of a compulsory course on anti-Semitism for each university freshman. If one doesn’t pass it, he or she cannot attend classes. They have presented this proposal to the Universite’ Libre de Bruxelles (ULB), one of the largest in Brussels.

The second fight of the Collective is that against denialism. They are especially concerned with the lack of laws criminalising genocide denial in Belgium (only the confutation of the Jewish Holocaust is illegal and prosecutable) and the lack of consequences for those responsible for such acts, said the two founding members.

To counter this, the group has been monitoring episodes of denialism in Brussels and beyond, trying to hold the individuals involved accountable. In 2017, the state-owned Brugmann University Hospital was considering offering to Sevket Temiz, a Belgian citizen of Turkish origins said to have previously denied the Armenian genocide, a place on its Board of Directors. The members of the Collective wrote a letter of complaint addressed to the mayor, the press and the public and manage to get Temiz’s application withdrawn.

Less successful was their contestation of the honorary PhD attributed by ULB to British film director Ken Loach earlier this year. Loach had been accused by some, including Belgian PM Charles Michel, of having overlooked anti-Semitic allegations directed towards Labour politician Jeremy Corbyn.

“We lost a battle, not the war,” commented Jakhian on the episode.

Finally, the third type of activity the Collective engages in concerns raising awareness about current genocides and mass murders happening across the globe. They want to alert and make noise, said Van Looy. Last year, the group protested in front of the embassy of Burundi the killings, violence and oppression of civil rights carried out by the government against its opposition since 2015. The Collective also put together a roundtable, trying to bring the two sides and start a conversation.

In early 2019, they will instead host a seminar to shed a light on the horrors experienced by the Yazidis – a religious minority mostly concentrated in Iraq, who worships a peacock angel- by the hands of ISIS. In 2014, tens of thousands Yazidis were killed, forced in exile or turned into sex slaves, because the terrorist group considered them infidels.

“We view genocide as a common denominator,” concluded Jakhian. “We are brothers in misfortunes and brothers in suffering.”