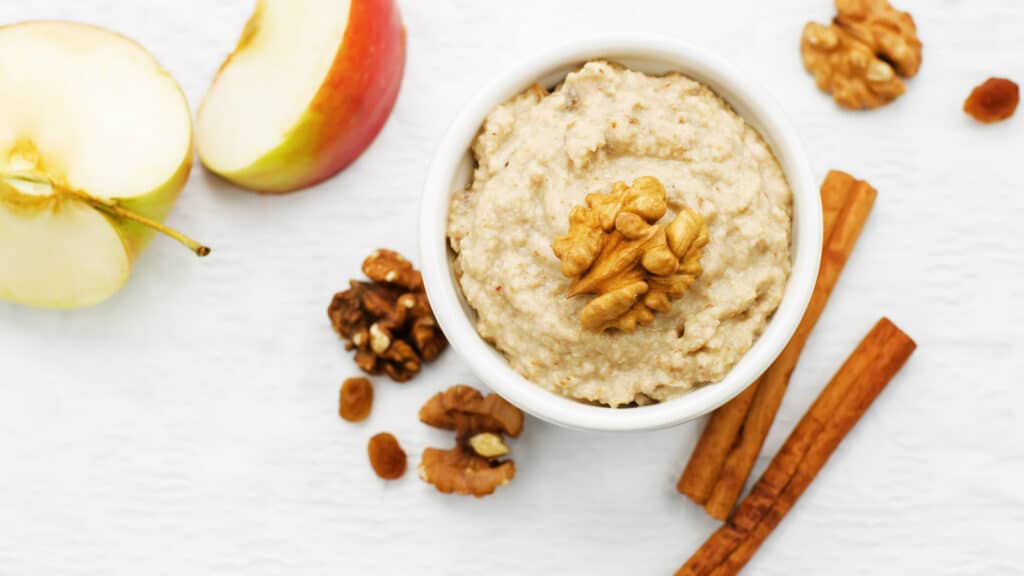 Among the Seder ritual foods, haroset serves as a symbol of the mortar used by enslaved Jews to build pyramids. Let’s discover some of its most special versions!

In every Jewish household, the week before Passover one shelf of the fridge gets cleared to leave room to a big bowl of haroset, a sweet, dried fruit-based paste which plays an essential part in the seder, the ceremonial meal kicking off the festivity. However, this paste’s taste, colour and ingredients vary from fridge to fridge, depending on the geographical origins of the Jewish family in question and where they have lived throughout their history.

In a holiday celebrating the liberation of the Jews from servitude in Egypt, haroset serves as a symbol of the mortar used by enslaved Jews to build pyramids, temples and palaces for the Pharaohs and the Egyptian elite. Interestingly enough, this is the only seder component whose meaning isn’t explained in the Torah, but rather comes from the Talmud, one of the primary sources of Jewish law and theology, written between 200 and 500 C.E.

During the seder, haroset is usually first utilised as a dip for the maror, the bitter greens which are eaten to recall the bitterness of the slavery in Egypt. After that, the paste is used to make a Hillel sandwich, named after the religious leader active in the 1st century BCE. A Hillel sandwich comprises some lettuce and haroset, enclosed by two pieces of matzah.

For my family, who traces its origins to the Syrian town of Aleppo, and for many other Jews from the Middle East, haroset is associated with dates.

“When one of you is fasting, he should break his fast with dates,” Prophet Muhammad is quoted saying about the Ramadan in Islamic tradition. But the date, in both its tree and fruit forms, has a particular significance for all faiths born out of the region.

It is listed among the Seven Species, seven agricultural products from the land of Israel referenced in the Bible and is a symbol of righteousness in Jewish tradition (“The righteous will flourish like a palm tree, they will grow like a cedar in Lebanon”, is said in Psalm 92:12).

Syrian Jews brought their original recipes with them wherever they went. When Aleppo, – once a central hub along the caravans routes from the East to the West- began losing its importance as trade flows moved to the sea after the opening of the Suez Canal in 1869, my great-grandfather moved his business to the more geographically advantageous port city of Beirut, Lebanon.

“You didn’t need the camels anymore, ma chérie,” as my grandfather puts it.

And while Aleppian haroset was filling the seder tables of Beirut-based Jews during the 1930s and 1940s, my grandmother didn’t learn how to make it when in Lebanon. Being still a young girl, others were in charge of the making of the seder. In fact, she didn’t get a hold of the recipe even during the first years of her married life, as in Japan, where my grandfather then worked, they would celebrate Passover at the local Jewish clubs in Kobe and Tokyo or at friends’ houses. But once she moved to Milan in the early 1960s, she asked her Syrian Jewish friends for the recipe, hoping to revive a tradition from the Middle East while starting their lives in a new country.

And this is how she does it, to this day. 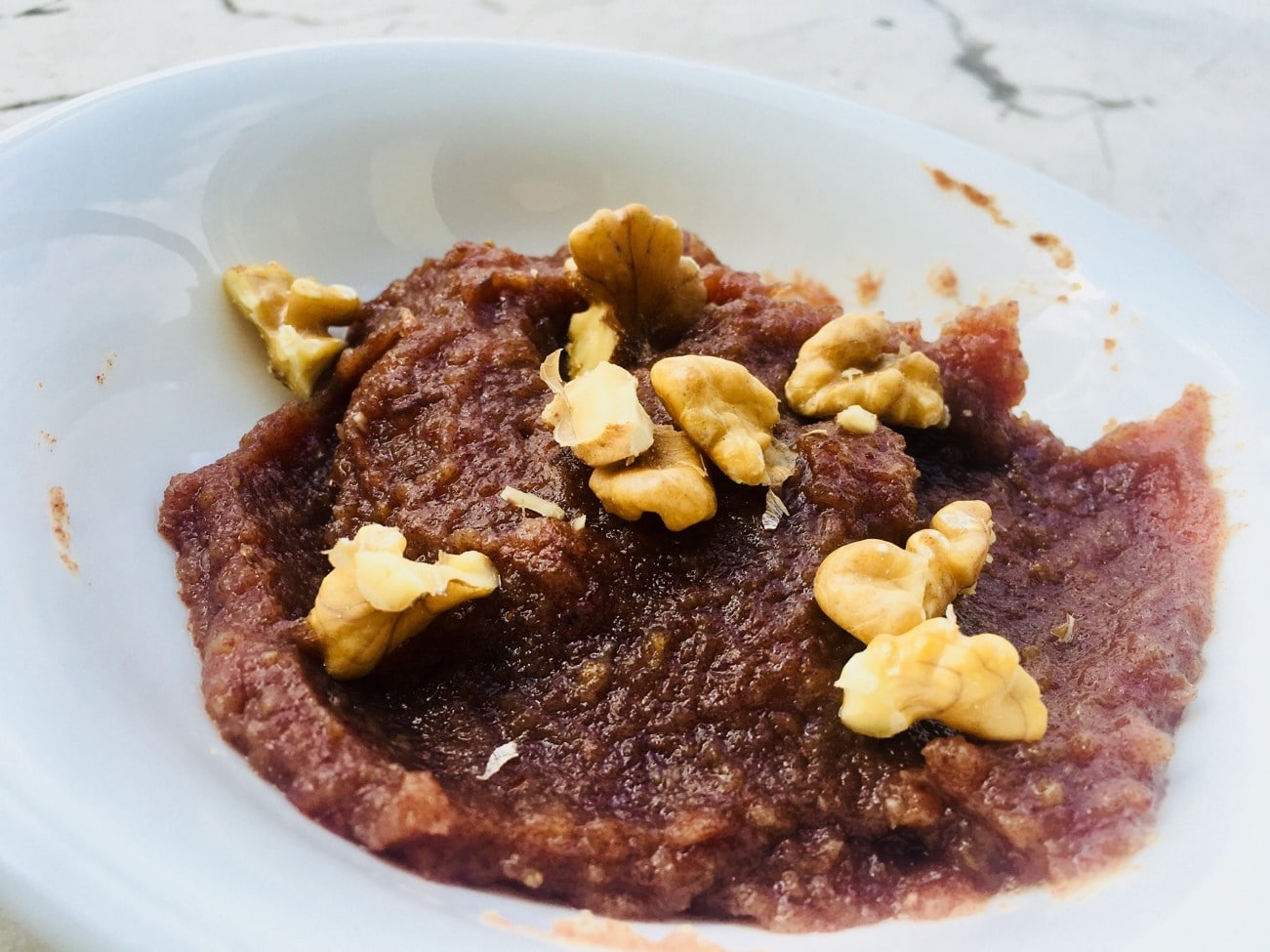 Aleppian haroset, ready to be eaten

Other versions of the Aleppian haroset don’t include the raisins – like that of well-known American-Syrian cooking book author Poopa Dweck. When I point that out that despite sharing the same last name with Mrs Dweck, our ingredient list for the Passover paste differ, my grandmother emphasises that without the raisins you are missing out.

Across geographies, the recipe for the haroset varies greatly, with its texture apparently the only constant. As for most traditional dishes, Jews integrated in it local ingredients of the regions where they had settled down.

This is clearly the case when looking at the ingredients list for the haroset in Piedmont. Jews began moving to the region in the 15th century, as the city of Turin officially opened its doors to them in 1424.

Over the centuries, as they made Piedmont their home, fruits like the hazelnut increasingly made their way through their dishes. Piedmont, more specifically the provinces of Asti, Cuneo and Alessandria, is home to one of the finest type of hazelnuts in the world, the “Tonda Gentile delle Langhe”, also known as “Nocciola Piemonte”. Piemonte is also home to the Ferrero group, which consumes 25% of the global supply of hazelnuts to produce its worldwide famous Nutella. Cognà, a mustard made from grape must, is another typical product of the area, in this case used to make the haroset softer.

The same reasoning goes for a Northern African version of this Passover paste. Jews had been present in Libya since the 3rd century BCE and reached a peak in terms of numbers in the build-up to WW2, when around 4% of the Libyan population was Jewish.

The date appears again among the ingredients list. The specific type to be used is the Deglet Nour date (also known as “Royal date”), originally from the oases of Tunisia and Algeria and common in the whole region. Pistachios and pomegranate, widely cultivated in the area for millennia, are also added to the mix.

This Friday, at the seder table, Jews all over the world will be eating haroset. Its aspect and taste will be different from home to home, but its meaning – a remainder of the end to a dark moment in the history of the Jewish people – is universal.