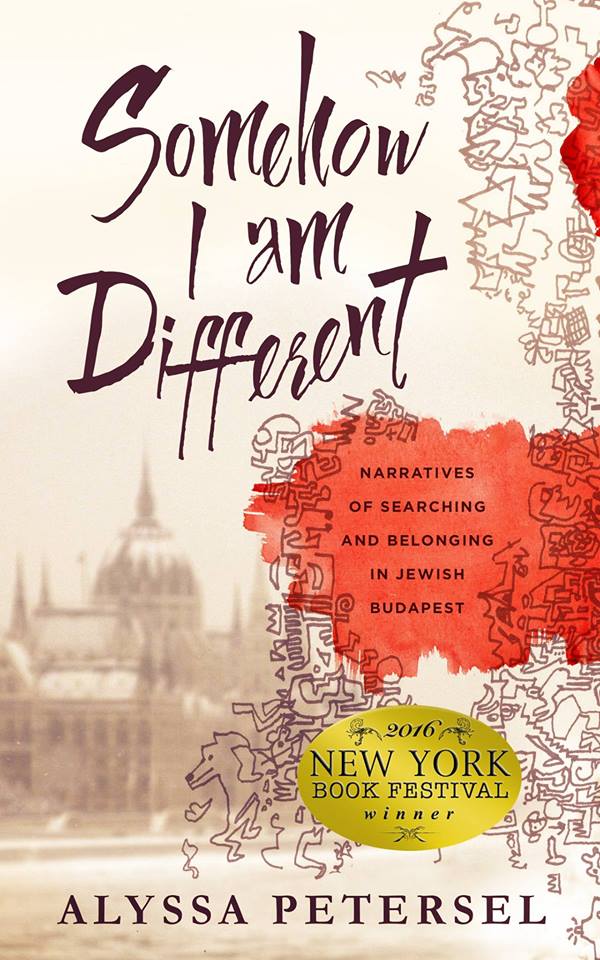 Between the person you are and the place you live in there’s a meaning to find. This could sum up the essence of Somehow I Am Different: Narratives of Searching and Belonging in Jewish Budapest, an anthology of interviews with twenty-one Hungarian Jews collected and published by the American author Alyssa Petersel. Printed by Acorn Publishing (2016), the book won the prize for the “Biography/Autobiography” category at the 2016 edition at New York Book Festival.

The roll-out wasn’t easy, though: the research proposal was rejected by any grant or fellowship to which the author applied. But Alyssa Petersel, a native New Yorker with an academic background in psychology, international studies and social work, and today the founder and CEO of a start-up focused on mental health care, didn’t give up. She launched a successful crowdfunding campaign on Kickstarter that eventually provide her with the financial support to spend eight months in the Hungarian capital.

Why twenty-one stories? It’s not a casual number, as the author clarifies in the book’s preface: it means three times seven, seven being a sacred number in Judaism.

The Jews in Hungary: from history to present

From community trainers and leaders to grassroots practitioners, from a hip- hop singer to a renowned chef and pastry-shop owner, from a language teacher to an academic lecturer, the interviews portray a very diverse and multifaceted sample of Budapest’s Jewish life, followed by an appendix that illustrates the milestones of the historical context.

The Hungarian Jewish community is today the largest in East Central Europe (esteems vary between 75.000 and 100.000. Source: World Jewish Congress). The 80% of Hungarian Jews lives in Budapest, where it accounts for the 6,4% of the city population. During the interwar period and the first half of World War II, Hungarian Jews were the target of racial laws and even forced labor, yet their situation was relatively safe, if compared to the rest of Europe: they were confronted with persecution, but not with extermination. The (paradoxical) reason is that Hungary was a faithful ally of Nazi Germany and was thus able to keep a certain independence in its internal affairs.

Until 1944. Worried by the evolution of the war, which seemed to prefigure the defeat of Germany, Hungary announced its intention to withdraw from the Axis alliance and to negotiate a separated peace with the Allies. As a response, German troops invaded, occupied the country, and started immediately to implement the “Final Solution”. So, Holocaust befell on Hungarian Jews towards the very end of the war, in the most abrupt and shocking way. For those who survived the death camps, the return was extremely challenging. Traumatized by the Holocaust, and repressed by the post-war Communist regime, the spirit of Hungarian Jewishness froze in a sort of numbness for many decades. Until it woke up again.

I’m Jewish and I don’t know it: back to the roots

A recurring characteristic of the interviewees, which perhaps represents the main aspect of interest in the whole book, is that for most of them, Jewishness was a discovery. They grew up knowing to a certain extent that “somehow they were different”, but without knowing how and why exactly. Without knowing, in short, that they were Jewish.

In a way, the book itself may be read as a collection of the stories about how this hidden identity was revealed. Some found out they were Jewish at a relative’s funeral ceremony. Some were told by grandparents on their deathbed. Some put two and two together after they were excluded from Catholic religion classes at school, or targeted with specific jokes by their schoolmates. Some others, having no clue about their being Jewish, were even involved in anti-Semitic movements at a certain stage of their life. Tomi, today a leading figure in the local Jewish associational life, recalls how his parents (in the 70’s, when asking someone directly if they were Jewish was problematic) found out they were both Jewish during one of their first dates: they went to see a play about World War II in Berlin and during a certain scene, simply, hold their hands a little tighter.

From euphoria to responsibility

Petersel explains how, after many decades, her generation (born after the fall of Communism) is the first to bring Judaism back to the center of conversation. Not only people discover they’re Jewish and are euphoric about it, but also feel compelled to do something with it.

So, discovery turns from a revelation to accept passively to a call for action. The human stories of Somehow I Am Different compose a mosaic of vibrant life. Hungary’s current political situation is not the precise focus of the book, yet references can be found in the interviewees’ statements. About the relation of Hungarian Jews with their country’s past and present, for example, Ádám, a community leader and organizer of Jewish festivals, says: “It is difficult (…) because we are living in a society where people’s grandfathers actually killed our grandfathers. Or it could be. It’s not only me that has to struggle, but also people from the other side (…) This also makes us very sensitive to our political problems and issues with democracy”.

You can learn more about Somehow I Am Different on its dedicated website.