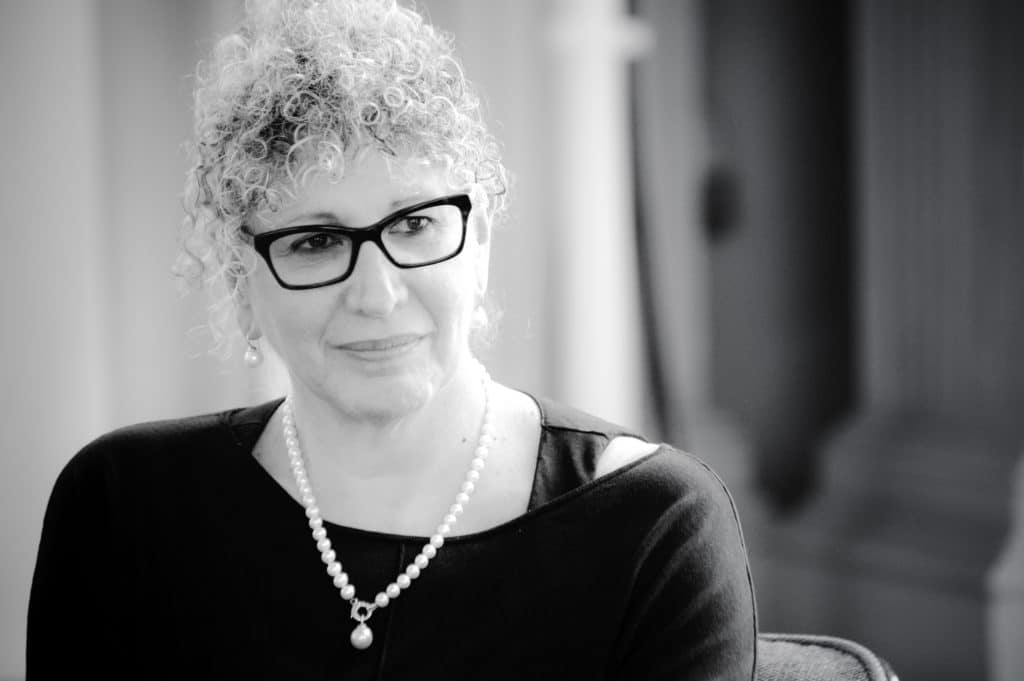 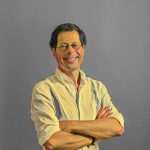 A morning with Lizzie Doron, talking about how it feels to be a citizen of two cities, her last works, the Jewish people, and everything in between.

It’s a sultry morning in Tel Aviv: you can barely glimpse the sun behind the sweltering curtain of the grey sky. Lizzie welcomes me with a smile in her beautiful loft in the north of the city. As I step inside, I notice a pair of suitcases, one open and one close, leaning against a sofa at the entrance. “I’ve just come back from Berlin” – she tells me as if she’s answering to my questioning look – “And I’m leaving again soon; that’s how my life has become…”. Later on, it will become clear to me that behind all the professional commitments, her continuous traveling around the world conceals a state of mind of authentic uprooting.

Born in 1953 in Tel Aviv, Lizzie lived for several years in a kibbutz before going back to the city; she wears a  light and soft-color dress, she has blonde, rebel curly hair and inquiring eyes behind a pair of big glasses.

She invites me to enjoy a delicious ice coffee (an espresso, she tells me proudly, as she prepares it with a pod coffee machine) and she begins to explain why she felt a little perplexed when, during our phone conversation, I proposed her to meet and told her about JOI and the situation of Italian Judaism. “At first, when you mentioned the word “Jewish”, I thought that you wanted to involve me in some religious initiatives, or in some of the many Jewish institutions of the Diaspora, and as you know, I’ve always had a very open-minded and secular understanding of my identity as a Jewish woman and as a citizen of the world. I’ve always conceived and lived my “role” of a Jewish woman within the society by carrying on a fight for equality, human rights and freedom of expression.

Lizzie hasn’t changed since I met her in Milan in occasion of the Festival “Jewish and the City”: an icon of Israel as a public voice for Yom HaShoah [Holocaust Remembrance Day], but also a unique, passionate, one-of-a-kind witness of a laical and civil understanding of what it means to be a Jewish woman in our world today. I ask her to explain how she came up with the decision to split her life between Berlin and Tel Aviv. “First of all,” she says, “it wasn’t really a decision: sometimes things happen without you being able to control them. I’d just written a book about this Palestinian young man and I was proud of it; I was feeling I had worked on something new and important, and I wanted to share it with my readers [the book she refers to is Who the fuck is Kafka, which was published in Italy with the title Cinecittà by publishing house Giuntina]. It was in 2009, during the war with Gaza, I had even lived together with this young man’s family for some days and underwent a sort of deep, uneasy transformation: for the first time I had opened up to listen to the version of the“enemy” and I had felt the urgency to share it with the world. Unfortunately, nobody in Israel accepted to publish my story and everybody put pressure on me to keep being the writer to whom they were used, the voice of the “second generation”. Finally only my German publisher understood the importance and quality of the book and accepted to publish it.

Apart from that, there’s actually another story that I’d like to share with you, it’s a secret about my mother. My mother was born in Vienna, and she knew that German culture wasn’t that popular in Israel for obvious reasons, but in some way, I inherited from her a fascination for it. My mother spoke German at night although she prevented me to use this language outside the house: as a result, I grew up being able to understand German, but not to speak it. That is to say, German language and culture is like something “forbidden” that connects the two of us. Perhaps in this untold connection between my family secret and the decision of my German publisher lies the true answer to your question”.

Suddenly, our conversation is interrupted by the phone’s ring. Lizzie answers the phone while she apologizes to me: “Every time is like that, when I’m here I’m in a hurry as if I have to do everything in half of the time before my next departure…”.

Back to the subject of our talk, I ask her how she’s been dealing with this new stage in her life so far: “I feel very quiet now, maybe because I finally understood that the story I want to tell is just one, and it belongs to everybody: it’s no longer about separation, about disconnecting the story of the second generation and my personal one, from the one of the surrounding reality. It’s about an ideal continuity that today I’m finally able to narrate, as if I learned to look beyond the contour of a bubble. That’s how I’m rediscovering the secret ties between my mother’s dreams, my childhood’s memories and today’s Berlin: a place that embraces culture and tolerance, where the fight for the rights and the values in which I believe hasn’t been silenced yet, a place that gave me my voice back”.

In a way I do feel like a refugee,

A light breeze has come to clean up the hot and grey morning humidity. Lizzie takes a break and looks away, towards the sea that now you can finally glimpse. As she gets back to her coffee, I ask her whether this new situation is also affecting her writing style.

“I do like this question!”, she answers with a smile “Also about that, I have to say that I didn’t plan it, but it feels like the stories are coming to me to ask for a voice, and I find myself willing to tell those stories, which I hear from other people and also reemerge from my memories. Like any writer does, and like I’ve personally always done, I collect stories around me: in the latest times, my specific focus has been the search for identity and homeland. Let me tell you in advance the title of my upcoming book: “First-class refugee”. Yes, in a way I do feel like a refugee, for my home country refuses to listen to the stories I want to tell. Certainly, I’m not the only one experiencing such condition, there are for example the real refugees from Sudan, from Ethiopia who find themselves in places that don’t fill their souls. The same is happening to me: I feel like Berlin is a better place to live my values and publish my books, yet my language and my history are still here, in Tel Aviv.  And you know, it’s not by chance that I’m speaking about cities and not about countries: today, in my view, the quest for identity is related to specific places, to the cities and not to the countries…”.

I dare asking Lizzie for some spoiler about her new book. She smiles, amused. “I’m still working on it, it’s a novel about myself looking for all the possible roots that connect me to Germany, in order to find a good excuse to stay here in Berlin! You will see, the book will answer to your questions!”. We laugh together, but for a moment only, as Lizzie becomes serious again and the sad unrest that has never left her in the course of our conversation reemerges back on the surface. “The destiny of the Jewish people has always been to restlessly look for a place to call home, to look for a safe shelter, without knowing precisely where to find it exactly. And today Israel seems to embody this dream of a home, this dream of a safe shelter, but who knows if this is really the case? I’m aware that having found two cities makes me a privileged person in a way, but the matter is actually much deeper, it relates to our identity and sense of belonging. As you were telling me on the phone, Italian Jews ask themselves the same questions: where is my place in the world? Where is my community? How is my connection to Israel supposed to be? Is Israel a virtual shelter only or is it a real shelter in case of danger?”.

I go back questioning Lizzie about her upcoming book. She talks to me about the evolution of her style, for she keeps writing in Hebrew but her books are eventually published in another language, which she understands but still can’t master completely. “It’s weird, but also funny: people are reading my books in a language that is not mine and this situation is also changing my style. Now if I have to write “apple pie”, I directly go for “apfelstrudel”; you can find more and more English and German words among my Hebrew. Well, they destroyed my Hebrew somehow!”.

The time has flown and now Lizzie must get ready for a wedding in the desert. “The heat will kill us all”, she says with a laughter. I propose her to end up our conversation by delivering a message for our JOI community and for the youths in particular.

“Young people can break the boundaries and go beyond the limits”, she affirms, serious. “I think that it’s really during this kind of times, in which democracy is often in danger, that we have to raise our voice and commit for the sake of freedom. And this doesn’t concern us as Jews only, it concerns everyone as citizen of the world. I think we should come up with the proposal of an alternative country, a country of freedom and equality. And we should bring this experience and understanding to Europe: we should learn to open our borders. If we do so, we can be Jewish, Open and Inclusive!”.