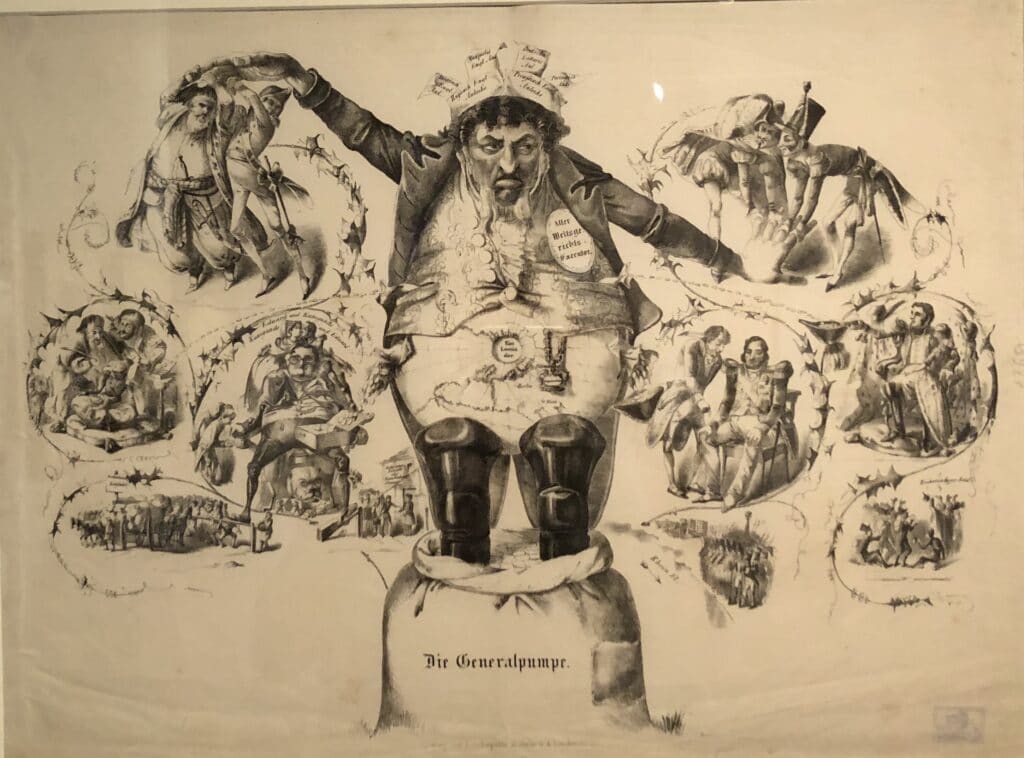 London, Jewish Museum: a journey through the relation between Jews and money across history defies antisemitism and stereotypes

LONDON, UNITED KINGDOM – Silence usually supersedes the blue-walled rooms at the Jewish Museum in the borough of Camden. But for the past few months, the quietness of this place is broken by a TV, blasting out loud scenes from worldwide- known shows such as the Griffins and the Simpsons, or reportages from more obscure channels in several languages. All that this footage has in common, is that it refers – whether as a joke, or not- to Jews as greedy, rich types, and the puppet masters behind the perpetuation of a globalist, capitalist society.

The exhibition “Jews, Money and Myth” opened at the London’s Jewish Museum this March. Curated in a partnership with the Pears Institute for the Study of anti-Semitism at Birbeck University, it provides an historical examination of the most common stereotypes linking Jews and money, and of the contexts they developed and diffused in. By illustrating the facts and mechanisms behind the emergence of these fake narratives, the organisers seek to cancel them out and challenge anti-Semitism by instilling in the public some awareness.

The exhibit comes at a time when anti-Semitism is making headlines in the United Kingdom. There were 1,652 anti-Semitic incidents reported in 2018 in the country, a 16% increase from 2017, according to the Community Security Trust, a charity protecting Jews from anti-Semitism-related threats. Moreover, internal debates over anti-Semitism have interested the Labour party for years now, with their leader Jeremy Corbyn – historically close to the Palestinian cause – accused of not doing enough to fight it: the tensions recently culminated with nine MPs breaking away from the party, citing Corbyn’s mismanagement of the anti-Semitism issue among their main motives.

Across Europe, the outlook for anti-Semitism looks just as bleak: a quarter of Europeans are convinced Jews have too much power in business and finance, and approximately the same percentage thinks they excessively influence conflicts around the world, according to a CNN survey. Of the polled, a third claimed they knew nothing or little about the Holocaust.

“People have said to me, aren’t you lucky [with the timing of the exhibition]?,” said Abigail Morris, Chief Executive of the Jewish Museum. “I am pleased on one level, but sad on another. In the current political climate, Jews don’t feel comfortable anymore. So I kind of wish it wasn’t so timely.”

It is all a coincidence, continued Morris. In fact, they had begun to work on the project several years ago, not long after she joined the Museum in 2012: the political discourse in the United Kingdom and in Europe was much different then.

At the root of the stereotype

The exhibition begins with a reminder: “Wealth and poverty are the products of socio-economic circumstances, rather than of Jewishness in itself.” Next, the visitor experiences a journey throughout the millennia and explore the relationship between Judaism and money. From the figure of Judas Iscariot – who, according to the Gospels, signed Jesus over to the Romans in exchange for 30 pieces of silver – as cornerstone for the stereotype of the greedy Jew, to the families of Sephardi bankers giving rise to the legend of Jewish financiers exploiting money to make the world turn their way.

The exhibition also seeks to juxtapose to these negative characterisations, extrapolated narratives and generalisations the real, broader meaning of money for the Jewish people. First, that money is not sinful, if used for God and the community: charity is a pillar of Jewish faith, as explained on the walls of the Museum. In fact, tzedakah, the Jewish word for charity, non-coincidentally also means righteousness.  Furthermore, it is associated with independence. The first shekel – today, Israel’s national currency- was minted during the first Jewish revolt against the Roman rule, in 68-69 CE, as means to distance for the rebels to distance themselves from the foreign rulers.

One of the main questions “Jews, Money and Myth” tries to address is how a stereotype is born.

“Stereotypes tell us more regarding the anti-Semite than the Jews themselves”, explained Anthony Bale, professor of Medieval Studies at Birbeck University, in a video included in the exhibition.

In fact, behind their emergence, is a person or entity particularly anxious or fearful about the emergence of an external phenomenon, choosing hence to project it onto an outside group, such as the Jews, according to Bale.

In the Middle Ages, worries about money-lending – in which both Christians and Jews were involved, despite both faiths considered it sinful- led the Catholic Church, to dissuade its followers to engage in it, to diffuse the characterisation of such activity as inherently Jewish, something Christians had to distance themselves from, as explained throughout the exhibit.

It was in this ideological and historical context that the figure of Judas acquired an increasingly negative connotation. Since then, it had been interpreted ambiguously, as he might had marked Jesus to death but had previously been his closest confidant and later regretted his betrayal, as written in the Gospel of Matthew. Yet now, Judas turned into the archetypal traitor, his greediness a feature of the whole Jewish people, as the exhibition tells.

“However, when talking about a stereotype, you shouldn’t ask yourself why they are born, but rather why they last”, said David Feldman, director of the Pears Institute. “Some last, some don’t and that in itself tells us something. The stereotypes surrounding Jews and money persist because they help people understand the complex and abstract forces around them, they put a face [to these phenomena].

Throughout history, the same repertoire of stereotypes – greedy Jews, or wealthy ones holding power over the world- have been employed differently depending on the ideological context of the times, continued Feldman. Their uses are ever-evolving, even today. The stereotype of the rich, capitalist Jew– and the consequent resentful feelings and language against them- has in fact undergone a renaissance with the rise of populism across the European continent.

The birth of this particular imagery is associated with the Sephardi families who resettled in the United Kingdom in the 18th-century: by providing banking services to governments, they reached an extensive political influence. British people feared these new arrivals, and all sorts of rumours spread: in the City, there were even talks that Jews wanted to buy St. Paul’s Cathedral to convert it into a synagogue. Among these families, the most notable, who prominently features in anti-Semitic discourse even today, are the Rothschilds.

Nathan Mayer Rothschild came to London in 1798 to open the first English branch of the family bank. The financier is represented in various, disturbing ways across the exhibition. He is depicted as “the General Pump,” a malign force standing on stacks of coins and fuelling world conflicts by pumping gold into the hands of leaders he’s controlling as puppets, or as demon with a uncontrollable hunger for money.

Morris and the exhibition curator, Joanne Rosenthal, discussed over whether showcasing such images would have been too gruesome, or sorted the wrong effect, an exchange recorded on the wall nearby the demonic Rothschild statuette.

“There is no right answer here”, explained Morris. “But we wanted to give the public a sense of that debate, which I think also makes you look at the object in a different way. It makes you look twice”.

To the myths surrounding the Rothschilds’ influence and the power Jews supposedly held and still hold over global politics, the Museum responds by stating the facts. Throughout the 19th and early 20th century, most Jews were actually poor. Throughout Europe – especially in the Eastern region, where emancipation laws came late- they were often confined to live in ghettos, could not own property and were restricted from practicing several occupations, as recounted by Professor Monika Richarz in a 2008 briefing to United Nations officers.

Jews in these poorer regions emigrated in mass to countries where they could hope for a better future, such as the United Kingdom: here, many low-income Jews ended up under the protection of relief organisations sponsored by their wealthier fellows. Those who remained in Eastern Europe often embraced socialism, as recounted by some objects shown in the exhibition. An Haggadah describes the ritual of the Red Seder, an atheist interpretation of Passover celebrated by Communist Jews after the Russian Revolution, commemorating the 1917 events rather than the Exodus from Egypt.

Yet, in the collective imagination, Jews remained wealthy, globalist capitalists: even Karl Marx, whom many Socialist Jews worshipped, wrote in his pamphlet On the Jewish Question (1844), that Jewish spirituality was nothing but a reflection of their economic life, and essentially equated Judaism to the cult of money.

Fast-forward to today, the stereotypes against Jews have become much more complex and multi-layered, agreed both Morris and Feldman. The 2008 financial crises, which exacerbated global inequality, and the migration crisis, fuelling European nationalisms, have proven a fertile ground for anti-Semitic ideas. Conspiracy theories regarding the Rothschilds or other Jewish billionaires, like populist-favourite George Soros, are an almost daily fixture for continental sovranists.

“That Jews are responsible for all these, is a stupid idea because these phenomena are so complex,” commented Feldman. “These ideas are given as a form of simplification – assimilating Jews to them helps people [who cannot make sense of them].”

Given the sensitivity of the subjects it touched upon, and after many people had told her it was a bad idea, Morris worried about the feedback the exhibition could get, she said. However, it was widely recounted both the Museum’s Chief Executive and Feldman.

“People needed this conversation to happen”, said Morris. “[They] are now telling me, it really changed […] my awareness. Naturally, I am not thinking it will mean the end of antisemitism, but initiatives like this can play an important role”.

However, there is a limit to the persuasive power of education, observed Feldman. A person who had previously made anti-Semite comments was taken to the exhibition, saw and appreciated it, yet at the end asked “Yes, but who did you get the funding from?”, he recounted.

“Education gives people knowledge and understanding to make better judgments, we can try to lead people but we cannot force it”, said Feldman. “Making right choices is [instead] a matter of politics”.